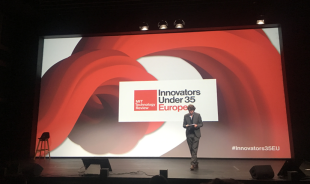 On any given day, the halls of the world’s biggest start-up campus, Station F, are filled with enthusiastic entrepreneurs and tech-prodigies. This time was no different and yet it was:
on the 4th of December, MIT Technology Review, in partnership with BNP Paribas, organised their annual “Innovators under 35” Europe summit.
Each year 35 carefully selected promising young, European entrepreneurs and researchers are invited to come together to debate their specific areas of expertise with like-minded talents in panels, to pitch their product or company, and to hopefully win the additional award within one of five categories: entrepreneurs, humanitarian, pioneers, visionaries, and inventors.

This year’s Europe leg of the tour took place in Paris, France. Three of the thirty-five selected this year were Dutch scientists.

Maayke-Aimée Damen took the stage during the panel “A Transforming Industry in a Super-Connected World” and pitched her company Excess Materials Exchange, or EME, with which she aims to “turn waste into wealth” and promote circular economy. EME allows you to browse for waste material which other parties can add to the site register. Damen jokingly calls it a dating site for waste, but her customers are no joke: they include the Dutch ministery of Infrastructure and Environment , Schiphol airport and ProRail, among others.

During the panel “Healthcare in a World of Urban Dwellers” Eline Vrijland-van Beest mentioned her father was a doctor who often treated people suffering from sleep apnea, which touches about 15 out of 100 Dutchmen. This sparked her interest in health innovation and she developed a lightweight device, called NightBalance, which improves the quality of rest of sleep apnea sufferers. Philips took a particular interest in her company and acquired it in May 2018.

Taco Cohen, frequently published PhD student at the University of Amsterdam, co-founded Scyfer with leading Dutch AI-expert Max Welling. Their research in deep learning and data efficiency sparked the curiosity of Qualcomm, which then acquired Scyfer and hired Cohen as a research engineer. He demonstrated how his work improved Qualcomm’s data efficiency by 10 during the panel “New Avenues in the Medical Frontier.”

This leaves us with 32 other inspiring European innovators and their products and companies, such as neuromorphic sensors for autonomous vehicles, personalised arm prostheses, and liquid biopsy to prevent curable cancers. All 35 hailed from diverse European countries and this is a strength we need to harness: Europe has many prestigious, modern universities and research institutes and European collaboration on this front would propel us collectively into higher leagues worldwide.